Safe-Standing in Spurs new stadium, Jon Darch: "I would expect government policy to catch up with reality"

The organizer of the Safe-Standing Roadshow: "Assuming that the government does not soon amend the all-seater policy, I foresee them being overtaken by events"

Tottenham have incorporated 7.500 safe-standing rails into the South Stand of their new 62.000-seater stadium. We speak about this, and the situation of safe-standing in UK, with Jon Darch: one of the leading experts about this issue and the organizer of the Safe-Standing Roadshow.

What is right now the situation about safe standing in UK?
"At this stage in England it is important to make a distinction between two things: (1) the use of rail seats and (2) approval for standing. Since November 2018, the use of rail seats (also now being called 'seats incorporating barriers') is allowed in all grounds in England. However, at the 60+ grounds covered by the government's all-seater policy standing is not yet formally allowed.

How did Shrewsbury Town manage to create its safe-standing sector?
"Shrewsbury Town were able to create a safe standing area (i.e. install rail seats AND permit standing) because they are NOT subject to the all-seater policy. That policy came into effect in 1994. At that time all clubs in the top two divisions had to go all-seater. Since then, any other club getting promoted to the second tier and remaining there (or even going up again) has had to go all-seater prior to its 4th season at tier 1 or tier 2 level (and is not allowed to revert back even if it later gets relegated, which is why many clubs in League One and League Two have all-seater grounds). Shrewsbury have not played at tier 1 or tier 2 level, so have never had to go all-seater by law. When they built their new ground 11 years ago, they simply chose of their own accord to have only seats. They were therefore free to change their mind about this and create their safe standing area".

The new Spurs stadium has got a huge safe-standing area. Do this kind of choice influence who has to make decisions about safe-standing?
"The Spurs situation is a good example of the distinction that I mentioned earlier: they are allowed to install rail seats, but not yet allowed to formally let fans stand. They have installed around 6,000 'seats incorporating barriers' at the foot of their huge 17,000 South Stand and another 1,500 or so in the away section. Officially these are still seats and fans will be in breach of ground regulations if they stand for the whole game. However, if they do, they will clearly be safer than they were in the past standing behind normal seats at White Hart Lane, so I anticipate that the safety authorities will take a pragmatic, tolerant view towards standing in those areas".

Actually, who has to make decisions about safe-standing?
"As far as who makes the decision is concerned, once again we must make a distinction. When it comes to deciding what is safe, that is down to the national Sports Ground Safety Authority and each ground's local Safety Advisory Group (chaired by a representative of the local council). It is now the accepted view of the SGSA that the use of seats with barriers mitigates the safety risk inherent in persistent standing in areas of seating. The fact that both they and the local council have given the new Spurs ground their respective licences shows that the stadium is regarded both as safe and as compliant with the all-seater policy. When it comes to formally allowing standing, that is rather a grey area. The only place where it says fans must not stand is in the ground regulations. Those are not put in place by the legislature. They are a part of the licensing agreement between the ground operator (the club) and the issuer of the safety certificate (the SAG / local council). In my view, the SAG / council could thus amend the regulations to permit standing in areas of seating fitted with barriers. Other observers would maintain, however, that no council is going to be willing to do this until the government indicates that it would be happy for them to do so and/or amends the wording/implementation of the all-seater policy (which currently states that any ground subject to the policy must provide "seated accommodation only")".

Amazing stadium Tottenham, really have thought of everything! Including seats with rails across the WHOLE 3000 capacity away end, making the inevitable standing MUCH safer! Other Premier League clubs should take note and install similar!

What are they waiting for?
"A very good question! I have no idea, though I do think that Mrs May's expected departure from No. 10 may help to move things along".

How do you think the situation will evolve in the next years?
"Assuming that the government does not soon amend the all-seater policy, I foresee them being overtaken by events. As it is now official safety advice that clubs consider installing rail seats in areas where fans stand persistently, I think clubs will come under increasing pressure from their SAGs and liability lawyers to take such safety enhancement measures. As a result, I think we will see more and more clubs follow the Spurs example and create areas fitted with such seating where their most animated fans assemble. I cannot foresee those fans sitting down. Ergo we will have fans standing in a safe way. Call it 'safe standing', if you like!. At some point in the future I would then expect government policy to catch up with reality". 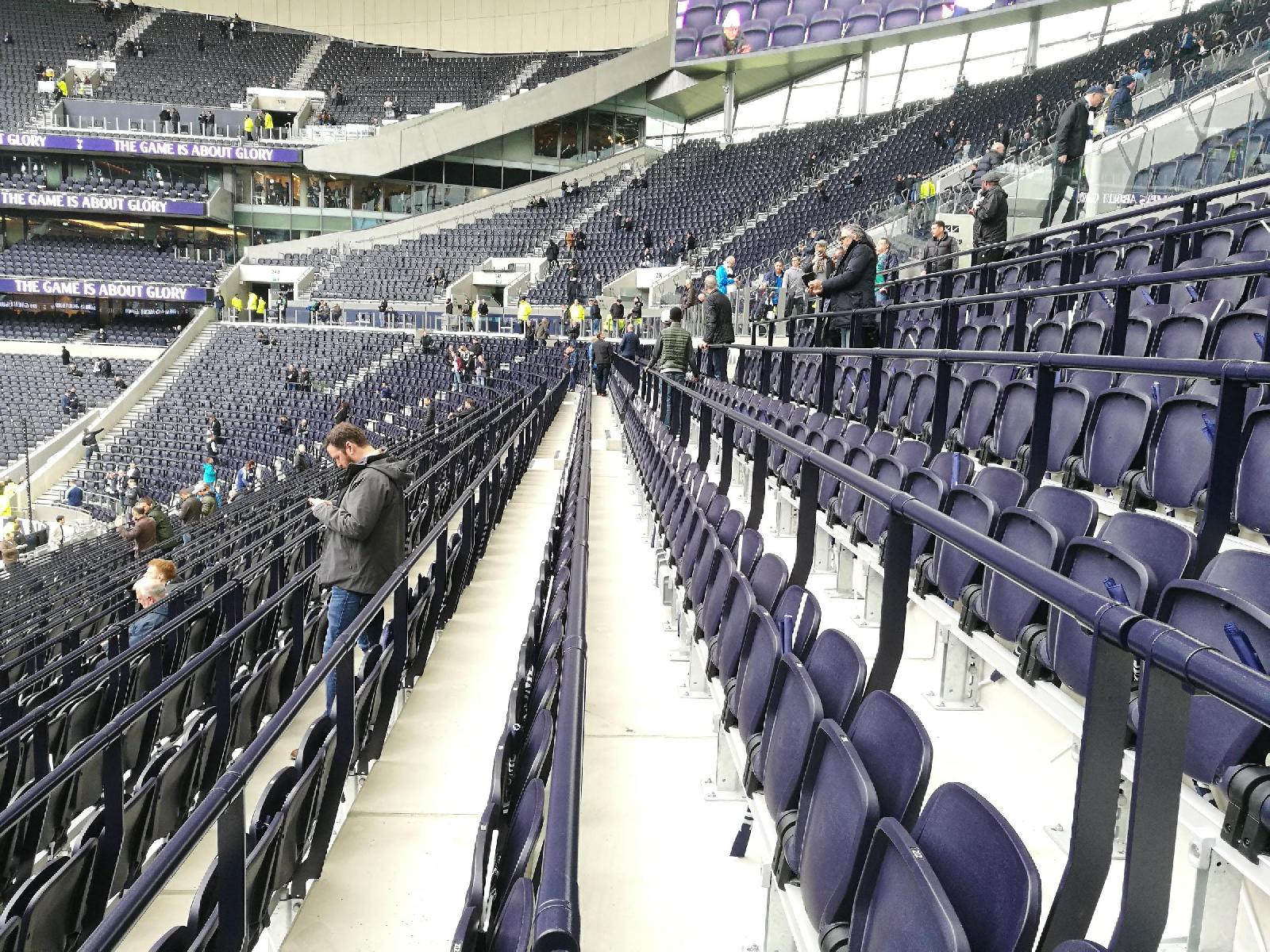 What did you do to fight for the acceptation of safe-standing, personally and with other organisations?
"I've been running the Safe Standing Roadshow for the last 8 years, demonstrating to clubs, the media, politicians and fans what rail seats are all about. I've done that working in collaboration with the Football Supporters Federation".

Is there in UK still a common fear about standing in the stadiums?
"Hopefully not. The aim of the roadshow has been to show politicians in particular that we are not talking about a return to the huge, swaying, often badly maintained and poorly managed terraces of the 1970s and '80s, but rather taking the status quo, i.e. standing behind seats, and making it safer. 99% of politicians now understand this". 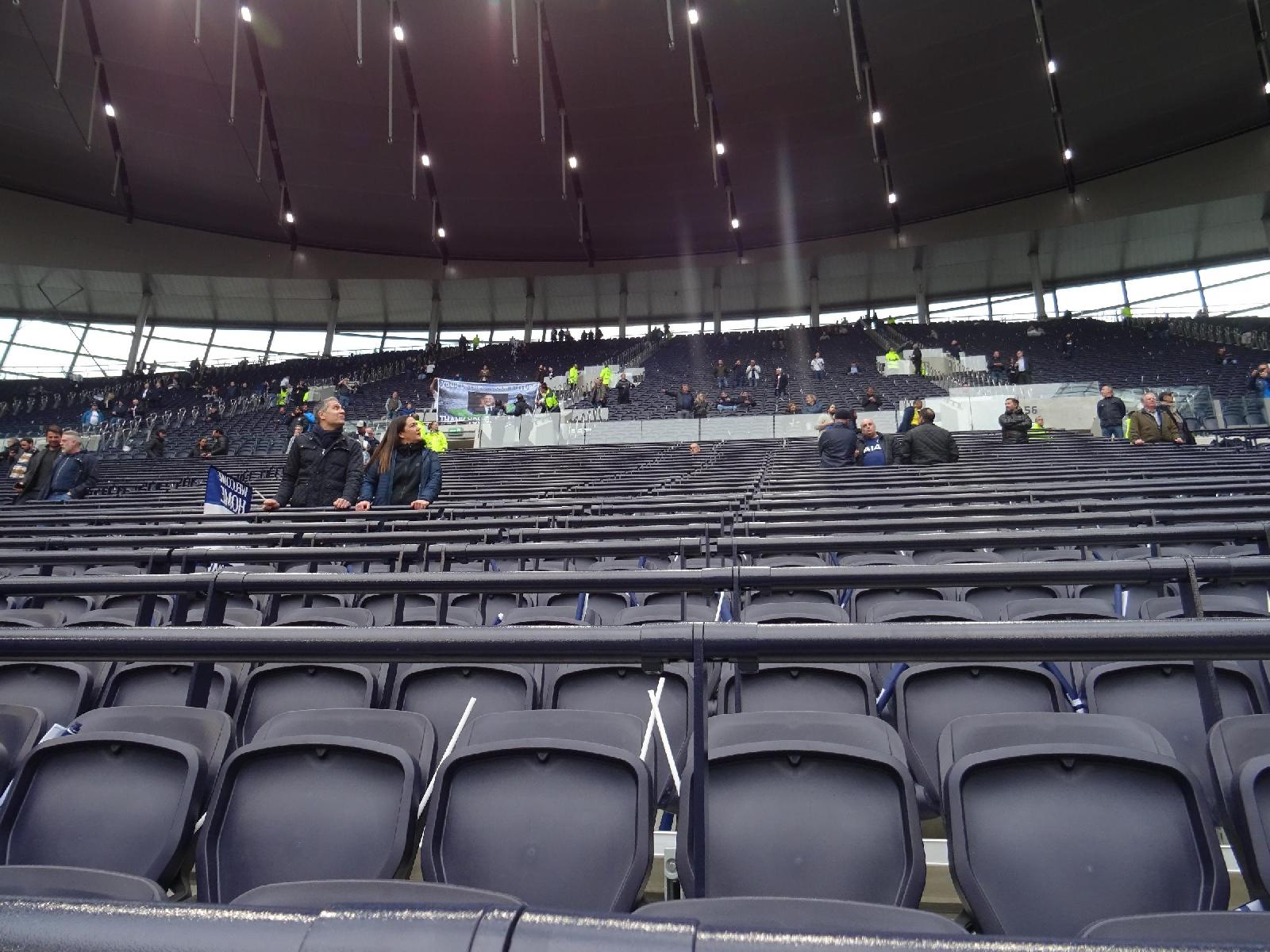 Do you think televisions could help to fight for safe-standing, to get a better "show" on tv?
"Absolutely! If I were a TV executive, I'd be demanding atmosphere and putting clauses into the TV rights contracts that penalise clubs and leagues if the atmosphere in a ground is flat. I've often said, that the best TV 'product' possible would be a combination of what the Premier League serves up on the pitch with the atmosphere provided by the Bundesliga fans from the stands. So if I was negotiating with the Premier League, I'd be demanding more noise from the stands!".

Did you speak or collaborate with Tottenham for their new safe-standing area?
"I took the roadshow to Spurs back in 2015. Their own fans groups also encouraged the club to look at safe standing for the new stadium. So together we clearly got our message across and it's great to see that the club has now created these first two areas of seats with barriers in the Premier League".

What are the peculiarities of Spurs safe-standing area? I read that is a bit different from the others.
"It is different from, for instance, Celtic and many similar areas throughout Europe in that the seat is not metal. At Spurs they have a conventional, moulded plastic, self-tipping seat. Fitted into the seat mountings are then the two steel uprights that support the rail across the top. This design has the benefit of being more comfortable when used as a seat, e.g. when the stadium hosts NFL games. In stadia with relatively narrow seating rows, however, this design leaves much less space free in front of the seat, which can be a significant drawback and potentially even lead to a capacity reduction (as the regulations say that every standing fan must have a prescribed amount of space, i.e. 0.21 square metres). It also takes up too much space to make it possible to increase capacity by including an intermediate step along each row and thus having more than one standing fan per seat space, as is the case at many German clubs. So for many stadia the metal seat or any other design with a minimal depth, ideally no more than 100mm, will work better".