From Trabzon to the delirium of Tirana: a magical year in 10 steps

From the run and the tears of Mourinho to the one-way derby. The decisive defeat in Norway against Bodø/Glimt, as well as the sold out stadium

Ten months in ten moments: here is a list of ten key instances during Mourinho's first season in Rome, where he was triumphantly welcomed upon returning to the streets of the Capital after a historical win in Tirana. From Turkey to Albania, an intense season put the hearts of fans to the test and that, in the end, made us explode with joy. Not only was the 2021-2022 season the first season with the "Special One", but it also brought us the Conference League victory, the return of full capacity at the stadiums and a connection between teams and fans that was missing for too long. Here are the most exciting snapshots.

The season began on August 19 with the Conference League playoffs: Mou's debut with Roma was an insidious trip to face Trabzonspor, who later became the Turkish champion. Roma won 2-1 thanks to goals from both Pellegrini and Shomurodov (interrupted with Cornelius' single goal for the hosts), laying the foundation for entry into the group stage and, eventually, led to the long ride which ended in chaos in Tirana.

On September 12, the Giallorossi, returning from four victories in the first four outings, faced off against Sassuolo at Olimpico for Mourinho's 1,000th game as a coach. It was a difficult and painful race with Rui Patricio saving the result in at least two circumstances. With a final goal from El Shaarawy in the 91', the 2-1 victory blew up the Olimpico. The Portuguese team and coach rushed towards the Curva Sud. If a moment where the love between a coach and the fans is absolutely undeniable, this was it.

In the third match of the group stage of the Conference, Roma, sending in many substitutes for their starting players, was overwhelmed by Bodø/Glimt in Norway: Roma lost 6-1 and Mou vented after the match, kicking a few of his players out, some of whom would end up leaving the team all together in January. From then on, the team would never miss an opportunity in the European matches again, especially when Mou met Bodø for a second time in the quarter-finals. Already losing to them in Norway, Mou refused to fall to them at home. Abraham was the target for the Norwegian fans who threw snowballs at him while he was walking out from the tunnel. As if the tensions were not already high at the start of the match, the atmosphere became heated between their coach, Knutsen, and Nuno Santos after the game as well. This time at the Olimpico, on April 14, we would be the ones to take the win with a 4-0 victory that would launch us towards the semifinals with Leicester.

On December 18, Roma beat a "big" again, and they did it away from home: Atalanta was annihilated in Bergamo 4-1, a win that will never be replicated. It was a perfect match for the Giallorossi with Abraham on the front line: the Englishman scored quickly, and from that moment on, he would continue to ramp up his game stats, so much so that he claimed the title of the best striker, having the most goals in his first season in the Capital.

The theater of the absurd

The referee's decisions (often infamous to say the least) were a constant issue throughout the season. Slip ups, errors and both yellow and red cards rained down on us in autumn, winter and spring, from Rome to Turin, from Venice to Milan. One of the most significant instances took place in Roma vs Genoa on February 5: Zaniolo scored in the 90th minute, putting Roma ahead 1-0 and it was topped off with a group celebration under the Curva Sud. However, the Var referee Nasca, disrupted the excitement when he unnecessarily asked the field referee, Abisso, to review the goal. After 4', the goal was retracted because Abraham stepped on an opponent's foot 40 meters from the goal. The match ended 0-0.

On February 19, at the interval between Roma and Verona , we were down by 2 goals: Mourinho sent Zalewski, Volpato and Bove onto the field; the latter two found their first goals in Serie A, allowing us to snatch a valuable draw. However, it was the Polish boy, who turned out to be the best on the field for the Giallorossi, eventually granting him a permanent spot in the starting eleven. José reinvented him as a left winger in a 3-5-2 or 3-4-2-1, and the 20-year-old grew his confidence during three extraordinary months, working on technique, personality, teamwork and the spirit of sacrifice. A star was born. 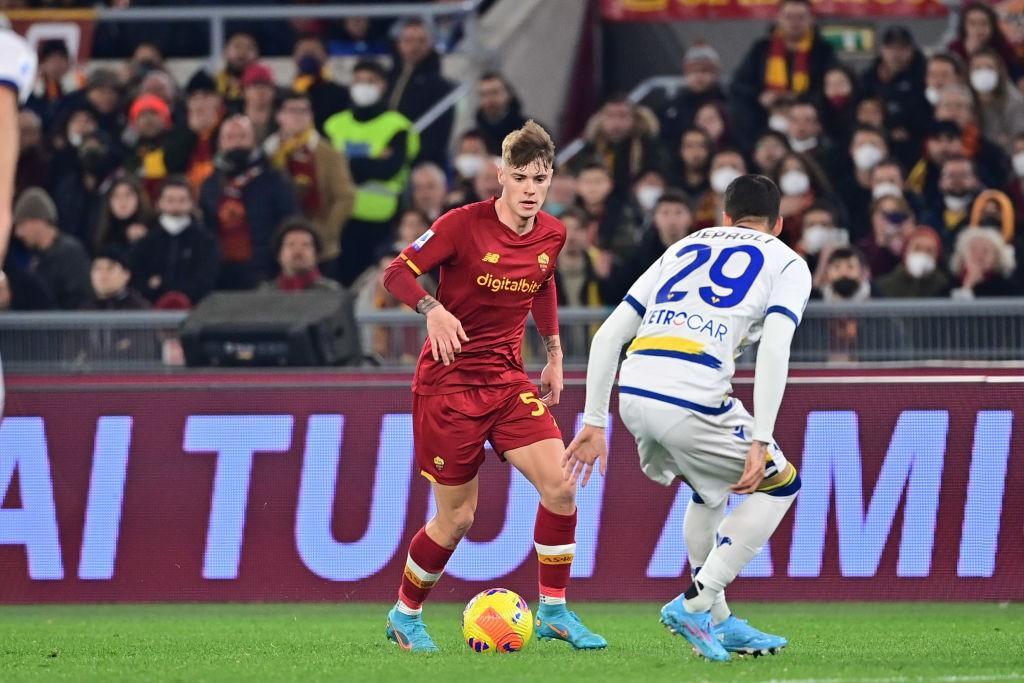 Zalewski playing against Verona (As Roma via Getty Images)

Once back from qualification (such a thrill) and on to the quarter-finals against Vitesse, Roma was expected to play in the derby. We feared there would be a bit of fatigue, but Abraham immediately controlled the game, taking us ahead not even a  minute into the game. The match turned out to be an absolute domination: the English striker doubled in the 22nd minute and, even before the break, the game was over with a sci-fi parable by Lorenzo Pellegrini on a free kick. The 3-0 win effectively closed the game, giving the Roma fans a memorable day and the team their eighth consecutive victory.

April 10: a date that will never fail to evoke sweet memories in Roma fans' minds. Four years after the feat with Barcelona, Roma hosted Salernitana in what was the first match in the Olimpico at 100% capacity since the pandemic. The memory of Agostino Di Bartolomei, whose birthday was two days earlier, also contributed to the high level of emotions from fans. A banner with "Agostino in the heart!" written on it flew around the field before kick-off and was accompanied with applause from all fans. The match started badly, with the Campania players taking the lead. In the second half it was a siege, which was only determined in the final minutes of the game with goals from Carles Perez and Smalling, putting all the Roma fans' trust to the test.

Now we are in the final moments of Roma-Leicester; Conference League second leg semi-final: thanks to Abraham's goal, we were one step away from our first final in 31 years. Mou anxiously watches, almost in tears, surrounded by the whole bench. When the referee blew his whistle, the coaching staff rushed towards the "Special One": now, yes, he was really crying. "My tears are for all Roma fans", he said shortly after, visibly moved. He repeated the word "family" like a mantra, his voice broken by emotion. We were one step away from the dream... 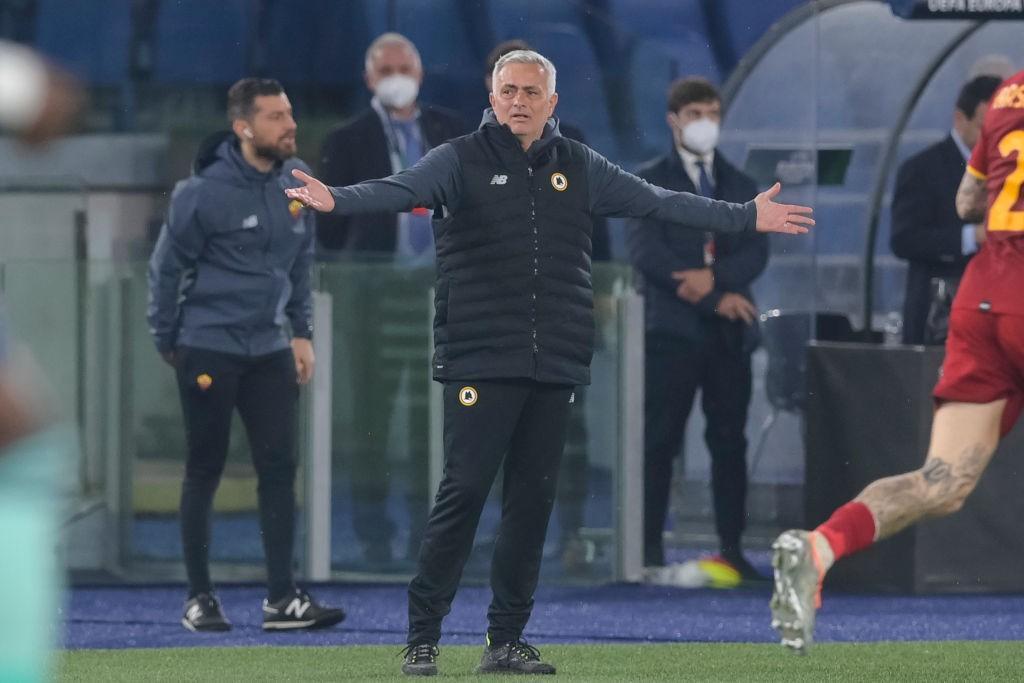 Perfect. Heroic. Historic. Unforgettable. The common 1-0 victory this time gave us a long anticipated 61-year-old cup to lift in the Tirana sky on May 25, a day for Lorenzo Pellegrini, the Roman and Romanista and all who contributed to the feat that Di Bartolomei, Giannini, Totti and De Rossi couldn't escape. It was a well-deserved triumph for a team, for a city and for the people who poured into the streets at the final whistle and would remain there until the following evening. The team parade through the city center streets was a show that we had been waiting for for a long time, but it had finally become reality. The bus was accompanied with love and celebrations from a flood of people. We are the champions!