The tale of the party: from Tirana to Rome

The European triumph explodes with joy from fans and teams who come together. It unlocks euphoria that had already been in the air for some time.

Passion with no borders. In every sense. First, the endless party in Tirana. Then, in Rome, at home, for all those who didn't have the good fortune to witness the historical challenge live. Hundreds of thousands of people poured into the streets of the Capitale to celebrate the Conference triumph last Wednesday in one of the most evocative settings on the globe. This is a magnificent testimony to just how wonderful this feels. The color and warmth was restored to a city that has always been fed with both. All the protagonists of the cup journey marched on to three uncovered buses. Everyone: coach, players, staff of all kinds, managers and even a president that is usually not very inclined to make appearances in the name of the "family" so often invoked in recent times. All for a unified purpose rarely evident in the past.

The cup victory has unlocked a euphoria that has already been in the air for some time; at least since we smelt the chance of a victory for generations. The reality is that the love between Roma and its fans has never reached heights as high as in this season. The match resulted in an almost natural ending and, for once, with a happy ending, but anyone who believes that the Romanisti's affection towards Roma are simply the result of a longing for a trophy, is mistaken. The trip on the Giallorossi buses with all passengers dressed for a party showed deeper intentions, even to less attentive gazes, far from this unique reality in the world, which, however, may finally have admired a feeling that exploded in all its intensity. Mostly mutual. Sure, success sets the celebrations in motion and makes everything more evident, but here the heroes do not rise above the people. They chose instead to merge with those who acclaim them, becoming one. The players intent of waving the flags, singing songs of the Curva Sud, calling for the accompaniment of the fans, lighting torches and smoke bombs, represented the overarching manifestation of everyone. 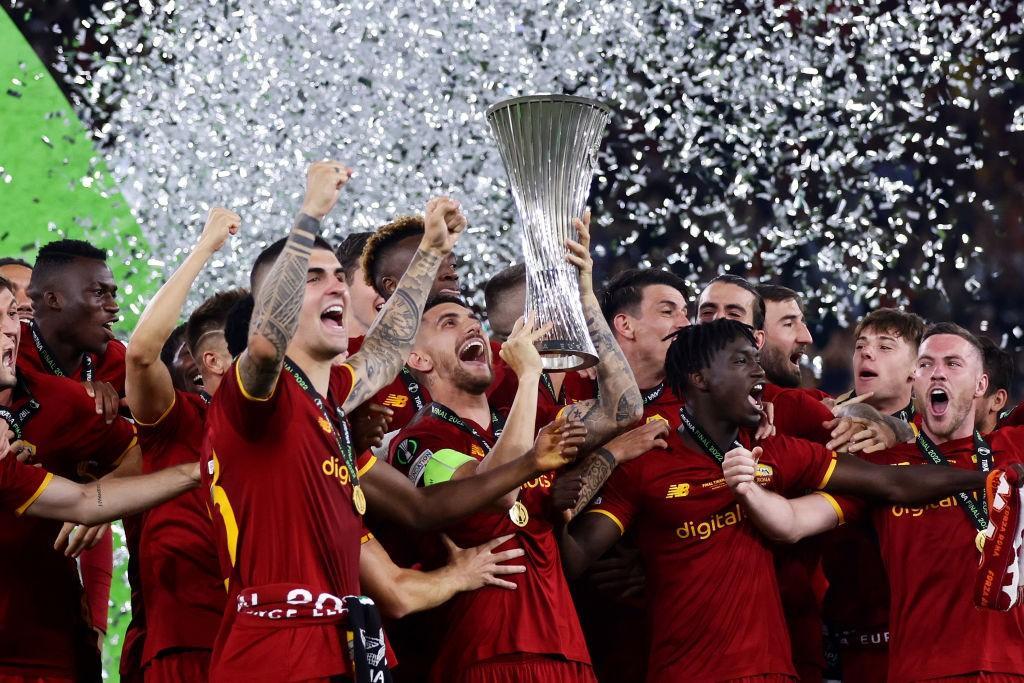 The celebration was most beautiful for those who have always considered the Curva Sud -understood as a synecdoche of the Romanist passion - an integral, noble and almost always a victorious part in the history of this club. Here is the real magic. The us before the self: a concept so dear to José Mourinho - especially in the crucial phase of the season - which has appealed on several occasions to those crowds, which in turn have fueled their feelings of empathy. The tears (repeated) of the Special One in the last two acts of the European journey are born there. They are sublimed in the celebrations shared with their audience. They become apparent in José's continuous gesture he made yesterday with his hand beating on his heart, throughout much of the triumphal journey between the monuments of the historic center. There is no doubt that José Mourinho gets set in his ways, something that was apparent since the beginning of his time, and, if possible, has become even better over the months, with the achievement of unprecedented success, at least in the modern era. All those who, in various ways (or even without having), have tried to diminish his success are served: when an entire city reacts in this way, enduring summer heat, working and facing logistical difficulties of a midweek day and very tight deadlines, it means that history has been made; something out of the ordinary. Everyone gets it, right?

From the frenzy in Albania to the oceanic crowd yesterday in the heart of the Capitale. Zaniolo and Mancini executioners; Mourinho with the people of him as emperor. It was sunset when Roma-Feyenoord started in Tirana. Imagine that during the match each Roma player held his breath and jumped a hundred years in a single day. At the exit from the stadium, the pitch of the Arena Kombëtare was covered, full of confetti until an hour after the game.

After, it was mostly a rush to the airport, traveling on foot, up to a certain point, by taxi, but above all by buses, which created a long line of trumpeting and cheerful vehicles, with Albanian drivers and accomplices of the Giallorossi supporters in paradise after the magical evening for Roma. Upon arrival at the terminal, the check-ins are very fast and there is a sensation of shuttles coming and going, planes on the runway and a lot of waiting. The lucky ones managed to leave only an hour after the scheduled flight time, but that was expected; whoever wins leaves later because he has to celebrate, will need a full stomach and will be more preoccupied waiting and enjoying extra time in the city that will hold a special memory forever. An hour or so of flying falls between joking around, a chorus and a semi-serious discussion about the transfer market, seeing the beautiful Olimpico from above which is still lit up for cleaning after the sold out match was finished.

The less fortunate, on the other hand, returned to Italy in the late morning with the charters taking over the Italian-Albanian sky in an air relay. There was definitely some frustration with delays, of course, with several impatient people despite the great joy they felt a few hours earlier. The less fortunate, among other things, were not able to chase the team, landing in Fiumicino shortly after 4 am, leaving hundreds of people who had arrived at Leonardo Da Vinci airport with a bad taste in their mouths. 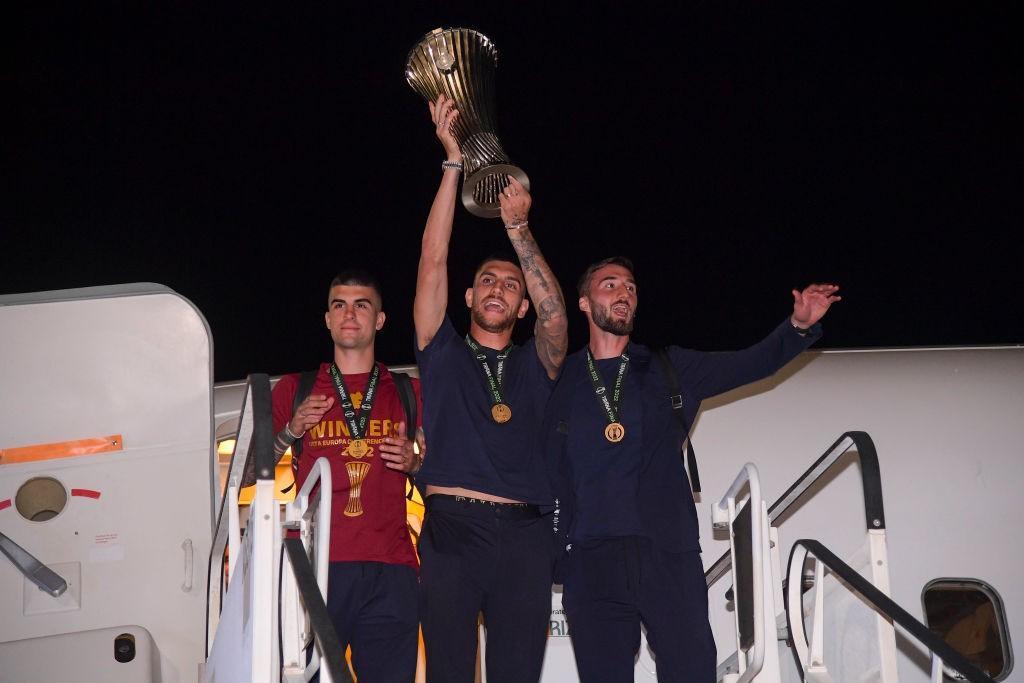 To celebrate the exit of the bus, go to Terminal 3? No, Terminal 5. Indeed, perhaps they "come out from behind". But behind where? Certainly everyone was unsure. Maybe it was not so confusing for some casual passer-by who possibly cheered on Rome and saw the yellow and red team bus whizzing by with the cup loaded on board and headed to Trigoria where they were to be welcomed by hundreds of other fans who evidently, all dawn, had been there for a long time: Roma had returned home.

In Trigoria, in fact, a stage had been prepared where a red banner with the yellow writing stood proud: Roma won. All of this on the terrace where Mourinho showed up on July 2, raising a scarf and lifting the cup. With Mancini speaking at the microphone, he called all his teammates to raise the Conference League trophy they had just won: the Italian leaders, captains Pellegrini and Cristante, the Portuguese Sergio and Rui, the two English players Abraham and Smalling, all waiting for the official celebration, which happened at lunchtime and mimicked a party in the streets, with the bus uncovered and the cup on display, scheduled for the afternoon.

"We are back in Rome! And we want to celebrate in our city with all of you. We will leave at 16:30 on the bus from Via delle Terme di Caracalla, and we will go together towards Circo Massimo" with a message that the Giallorossi club gave to its fans who were waiting for one after a memorable night, all with the desire to celebrate with the team, with the club and with the cup.

There were three buses that passed through the crowd of fans: the first one, which led the parade, was for the players, the one that sat highly acclaimed was for José Mourinho with the team staff, the press office and a large number of employees of the club and finally a third with Dan and Ryan Friedkin as great protagonists. Hundreds of thousands of fans crowded the streets of the Capitale, an alive river of people that descended from Colosseo towards Circo Massimo, and from there ascended towards Caracalla. The waving of the flags, the chants and the banners began well before the arrival of the buses, which, escorted in their advance by the cordon created by the police, met the crowd already waiting at Mura Aureliane at the apex of Viale Cristoforo Colombo for the first time. Then they went down towards Piazzale Numa Pompilio and they turned left on Viale delle Terme di Caracalla to Largo delle Vittime del Terrorismo. Then, again, the procession headed right (without entering Circo Massimo because the streets were full of cheering Romanisti) to Piazza del Colosseo, then greeted their people, took via Labicana, circumnavigated the area and went to resume the Cristoforo Colombo with a destination of Trigoria, where other Roma players were waiting for the team. 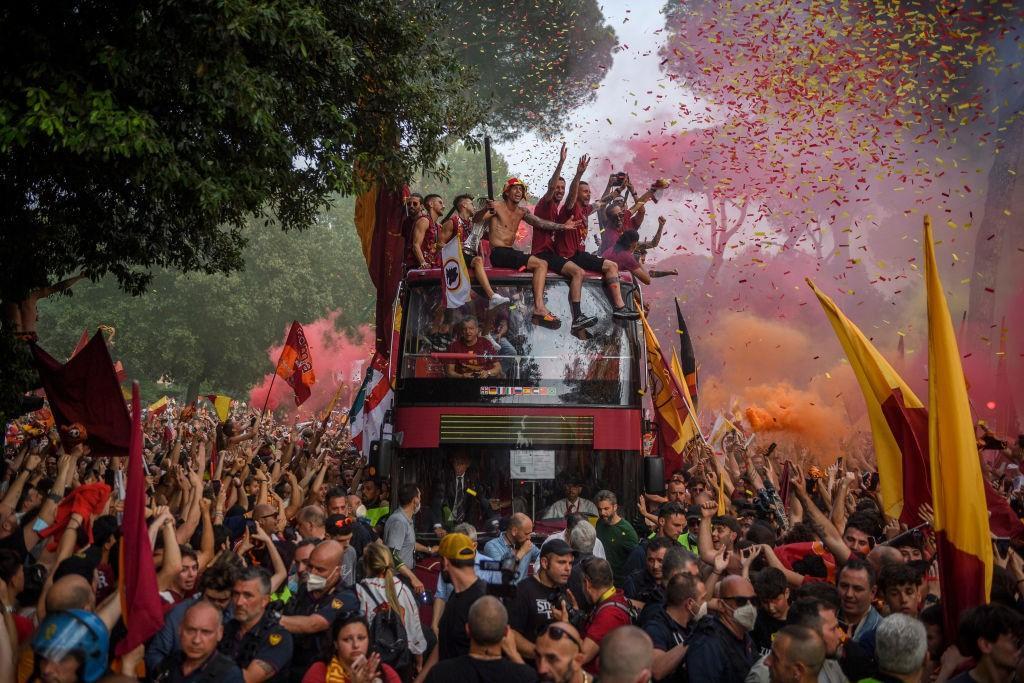 A show. There is no other word to define the way in which the Roma family gathered yesterday afternoon. Among the players, Mancini and Zaniolo were the most "hyped": the first sang into the microphone and even lit a smoke bomb after putting it in his mouth like a cigar. The second was just like a regular visitor to the Curva Sud: he never stopped singing, from the songs for him and his teammates to the Giallorossi anthems. But the irrepressible joy belonged to everyone: Smalling and Tiago Pinto threw champagne at the people, captain Pellegrini kept the cup and raised it dictating the rhythm of the "olè" of the fans, Zalewski and Bove collected banners from the Curva Sud and proudly displayed them. Fuzato, Felix, Abraham: they all participated because Roma is a family and because so much love is inevitably enthralling.

There was so much admiration and satisfaction in Dan Friedkin's eyes, so much pride in the "fist" of exultation of his son Ryan. There was no shortage of choruses and open-stage applause for them: "President , bring us Dybala", the Romanisti sang more than once. Mourinho remained seated for the first stages of the journey, but at the constant call of the people he got up and greeted all his supporters, almost moved. "One of us", they sang to him, where that "we" stands for Roma, therefore also its people and all of the city. Passing from Caracalla to the Colosseo usually takes no more than twenty minutes; the Roma party procession took three hours, full of joy, colors, and Romanisti smoke bombs that people have not seen in these parts for years and something everyone hopes they will see again soon. Roma won.